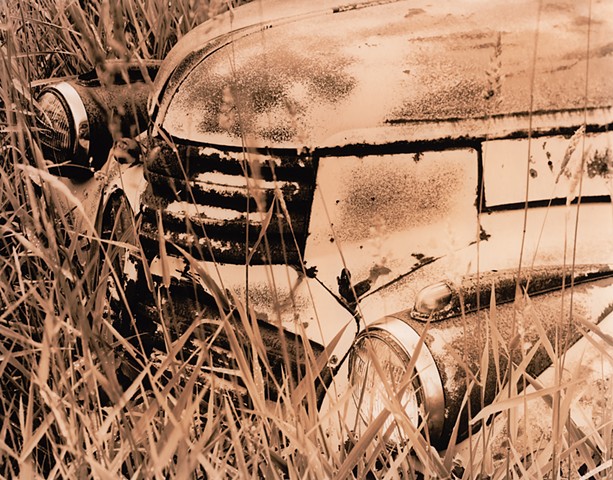 Well before the advent of the Interstate Highway system, "auto trails" were how travelers navigated from one place to another far away location. These routes were given names instead of numbers, and were identified by brightly-colored signs along the highway.

The most famous of these auto trails was the Lincoln Highway which ran coast-to-coast from New York City to San Francisco. The names of others were certainly created to inspire a sense of traveling from one discrete place, culture, or climate to another, such as the Glacier to Gulf Motorway that went from Calgary, Alberta, Canada to Tampico, Mexico.

One of these auto trails was the Dixie Highway which connected Sault Ste. Marie, Michigan with Miami, Florida. I was driving down a section of this road in Michigan's Upper Peninsula one day when I spotted an old pickup truck firmly in the grasp of some weeds in the corner of a yard.

After gaining the permission of the property owner, I set up my camera and made several exposures of the truck. Upon my return home I followed my usual process, of developing the film and making a work print of the most interesting composition. But for some inexplicable reason, the image did not inspire me to work with it further, and it was consigned to the filing cabinets where some photographs go to die.

Several years later I was searching through my negative files when I came upon it again. I envisioned how a finished print would look, and immediately set about realizing that vision in the darkroom, producing one of my favorite images in my long-running project exploring the idea of entropy. The title is a nod to the image being strong enough to come back to life.